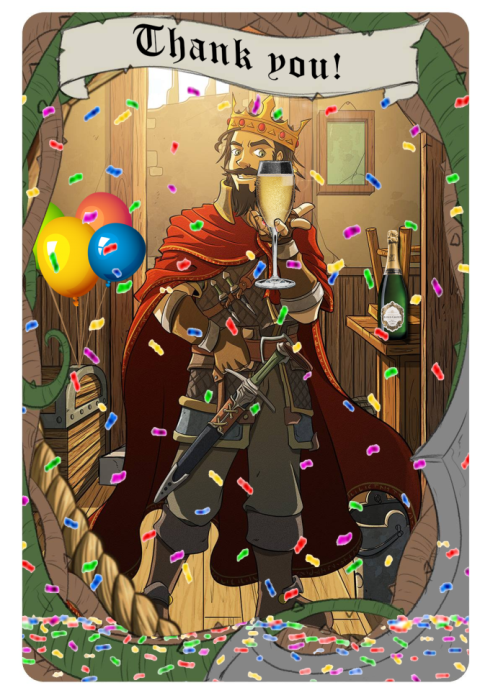 thank you very much for your support, we are really grateful to you for making the dream about this game come true! Now it’s only a matter of time until everyone receives their very own copy of Dice Upon a Time!

We emphasize that Korona Games keep their promises, as proved by our previous campaigns as well. And now let me briefly talk about those negative comments that appeared in the thread in the last hours. We are very sad that this game has been in the making for two years and in the last month the Team barely got any sleep to give you the maximum, and some people still think that everything is questionable. It’s elementary that we wanted to provide the maximum content, but if you know Kickstarter and the real world, then you are also aware that all this has to have a financial background too. Believe us, it hurts the creators a lot more to see the locked stretch goals… But completely honestly, we think that this unique game mechanism with the beautiful artwork and minis, the miraculous world of the Grimm brothers would have been worth a lot more supporters. We believed in all of this and wanted to put more miniatures and more extra content into the box. For our vision we spared no effort in the background, the company spent significant amounts on marketing and business agreements. As the result of our efforts there are more than nine hundred people all around the world who liked what we are doing and gave us their vote of confidence. This achievement won’t be of course challenged by some unkind comments, but despite this wasn’t our first campaign, we are still astonished at the level of blackmailing, pretentious and demanding voice some people take liberties with. It’s clear that compared to the hundreds of silent and committed supporters these few people are just a marginal minority, but a visible and audible minority. When we honestly declared that Cinderella or an other miniature is over the budget, they allow themselves to complain about an “incomplete” game. This game was complete and playable without any of the stretch goals, and it was our effort to expand it with more and more extra content beyond our means – while keeping the price below the expectable level. Yes, we exceeded ourselves, we did not only get less than we expected, but gave more, therefore the campaign wasn’t financially successful. But luckily there’s a publisher behind us which is still committed to maximum service in quality games. Perfectionism and true customer service must be rewarding sooner or later. Thus you are going to get everything that got unlocked.

Moreover, to show our reverence, we try to give you the next goal that was not achieved, the cool fluorescent coating on the box. It is under discussion with the manufacturer and we hope there won’t be any obstacles.

And also, we couldn’t bear if any of our backers had a trauma because of Cinderella, therefore we are working on a win-win solution in this topic. The artwork is already done – hence she on the cover -, but the 3D design isn’t, which doesn’t come cheap.

Soon we will start a survey to see if there are at least 50 of you who would like to buy Cinderella. If yes, then we will ask our sculptor to prepare her mini and you will be able to buy the character package as an addon for a price around ten dollars. This way the game can be really complete for everybody and we can all celebrate a further growth of the game.

Just like with the third Magic Item card, for which only 30 likes are needed on the Facebook page of Korona Games!

We tested the co-op version also on the campaign closing event, and our feeling that you will enjoy it, has grown! It is really exciting and gives a completely different game experience than the competitive mode.

We don’t stop even for a day after the campaign, because our goal is to give the whole package to the printing company by the end of June, so that they can start working on it right away and we can send you your copies this year.

At the same time we will launch the pledge manager, which will be powered by BackerKit. I don’t think I need to introduce them, their name is a seal of quality. The next step depends on the printing company, but they promised to prepare the first copies by the end of September. And we will forward them right away for we hope you will be able to hold them in your hands before the end of the year. We will keep you informed.

Once again, we cannot thank you enough that you believed in us and supported this dream. We reckon upon your support in the future as well.

Korona Games
– Quality in board games –