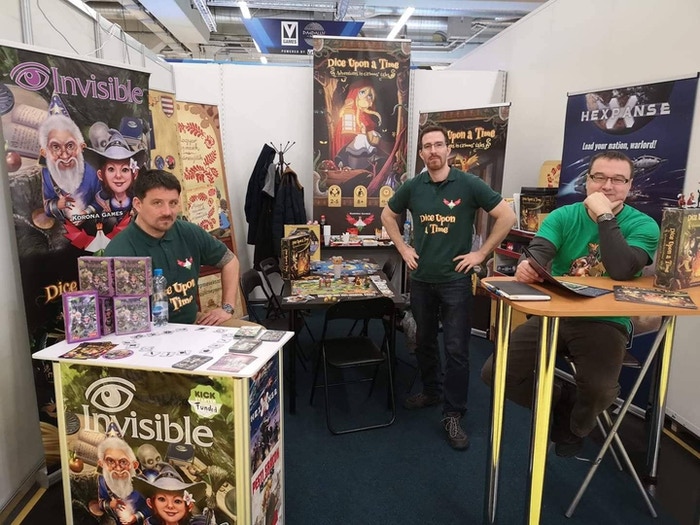 Once Upon a BGG

We hope everyone who was not affected by the outage of VFI has received your games. This the games to Asia and Australia had finally been sent, and we hope that you will be able to hold them in your hands within the next 1-2 weeks, as well as you will like it, since you are one of the people who helped to create this game as one of the first supporters.

In January we have travelled to the game expo in Nürnberg, where we had quite a few conferences in search for new distributors and publishers. We had some pretty promising talks and managed to get the Dice Upon a Time into several big companies’ hands. Let’s hope that the game will soon get it’s well deserved international release.

Before that we had gone to Essen, where we had quite a big success: all the games have been sold till the end of the third day, and this led to future successes as well. For instance, Tom Vasel from Dice Tower had found our box as well and received the game from us. Perhaps you have already seen his video on it, if not, you can check it out on the following link:

Tom is well known for his meticulous personality, not afraid to share his negative views – as we have learned that before – so the approve from him felt very good for us. He is a man who is used to more complex games, which meant that the DUAT would not become one of his favorites, but it was very well received by his children. The game was never meant as a heavy gamer game, but one for families, so the fact that the children loved it means that we had made what we wanted, thus it is considered as a great success for us.

On another topic, good news about Cinderella. As we told you before, due circumstances that we could not affect we had to postpone sending out the Cinderella miniatures since the original manufacturer couldn’t make it. This meant some very serious costs on our end, but we have always wanted to uphold our promise, and entrusted the Ningbo Eastar with the task of making them. This means that it will take a little more time to receive them, but it will be worth it. The corona virus shouldn’t be a problem for them anymore, the PU sample is already done, and they are in the procedure to finish the mold. If everything goes as planned, they will be done at the end of April.

Here are some pictures of the beautiful miniature:

As we search the internet for the Duat we find a lot of new critiques of it, and this very fact feels the best for us, as it means that the game is live. People play it, people paint it, all because they enjoy it. Let us share a few of these works with you. We did not ask any of them to paint the minis, but they did it because they wanted to. We have managed to find their works and wanted to give a great shout-out for them with their permission. Without further ado, the pictures:

If you have any photos where you’re playing the game or painting the minis, don’t forget to upload to BGG, so we and everyone can see it!

We would like to thank each and every one of you for the positivity in the comments, on the forums, not to mention those who rated the game 10 out of 10 on BGG. It is very important for us to get feedbacks, every comment and rating enforces our belief that it is worth it to work so hard to publish this game, and gives us strength to continue our path. This game would have never become reality without you. Thank you.

Unfortunately just like everyone, we also have a few foes, who for various reasons, sometimes even admittingly without trying the game gave us ones to pull us down. 🙁 These are sad instances, but we try to focus on the positive side: we have not received a feedback like this outside of Hungary.

We would like to emphasize that we are not against negative critiques based on reasons, as those are important to be able to improve in the future, and we also understand that we can’t satisfy every need.

We would be very glad if you rated the game on BBG through the following link, so even more people could find it:

Dice Upon a Time | BoardGameGeek