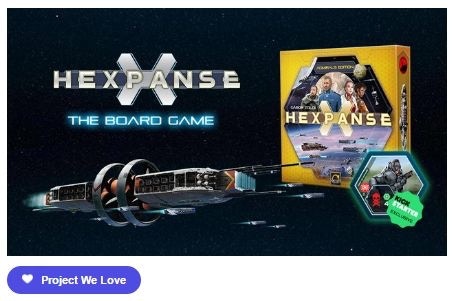 WOOHOO! Now we have all the reasons again to rejoice!

We have a bulk of good news to share with you in this update. The greatest sensation is the PWL:

Kickstarter has chosen us: we have gained the title of Project We Love! Ours is the joy, but yours is the honor, dear Backers! Our launch would not have been such a success if it wasn’t for you, and Kickstarter would not have noticed the project WE love. So our gratitude belongs to you again! There are 24 more days left! Keep on helping us, so Hexpanse will become not just a game, but a legend.

You might have noticed by now that we exceeded the 34,000 limit. That means that you have successfully unlocked the second stretch goal, thus increasing the number of cards in the game. The next step is at hand!

We still have news remaining: Several people asked for a gameplay video, so we offer you a new, unofficial review made by one of our kind followers with the creator of the game:

Detailed review from the most popular online newsportal of Hungary.

Those who keep their eyes open might have found the article on index.hu. Hungary’s biggest and most popular online news site wrote about the success of Hexpanse, and also pulbished a review earlier. In order to save your time spent in front of Goggle Translator, we have translated the article for you.

Conquering a Planet with Tic-Tac-Toe

Board games took the lead from video games on Kickstarter, where the genre is going through a renaissance and complex, ambitious and high concept projects appear from time to time, including many successful Hungarian campaigns as well. Hexpanse is also a part of this wave: it is a Hungarian game which is going to launch on Kickstarter only in 2017, but we had an opportunity to try it much earlier.

We could describe it very briefly as a combination of planet colonisation and tic-tac-toe. It may sound quite strange, but the truth indeed is that the enormous game, which is a little bit complex at first sight and contains a bulk of components, is based on the popular paper-and-pencil game. There are four different factions, a planet waiting to be colonised, and a pattern for the players to complete… or they can also choose to eliminate all the others. But the point of the game does not reside in creating a given pattern the most quickly, but in the bonus cards and actions which make the simple tic-tac-toe a double battlefield.

We tried the easiest game mode with four players first, and we had quite a difficult time with it. We needed some time to analyse the rules, because we had difficulties with figuring out the game mechanics and arranging the game components. The different factions have different abilities, we can hire mercenaries, buy action cards, while paying attention to our funds, the deployment of our ships and the protection of our warlord. And of course, the four players are trying to complete the same pattern at the same time. We had to learn the pairing of icons and actions, and we found the rules a little bit difficult to understand. Hexpanse may be incredibly simple on the whole, but the rulebook has some tricky parts. We missed some examples and tactical tips for beginners to make the start easier, and we though that too much is up to the players’ interpretation. Later we tried the more difficult version with two and three players: this game mode contained the minor factions and some special units, which further raised the difficulty of the game. Surprisingly, we realised that this is the true Hexpanse experience and this is how this game is meant to be played. It just takes a little time to truly assume the driving force of the game. And this driving force is in the modifiers, the action cards. All the mercenaries and minor units have special abilities which make the tic-tact-toe pretty complicated.

This turns Hexpanse into a battle card game quite soon, in which not only the completing of the pattern counts, but the players’ ability to play the different cards wisely, thus gaining more funds and being able to buy the better, more expensive cards. The game seemed much easier this way, because we could easily learn that an astounding amount of tactical opportunities are there to choose from, depending on what we have in our hand. Some may choose the path of slaughtering others, and some may use combos to destroy the enemy patterns just to replace them with their own quickly. It is obvious that Hexpanse was made by people who know much about the higher category board games, and this might be the reason why casual gamers may find the rules difficult. Our board game expert still foretells that this concept will be a certain success on Kickstarter, where people love sci-fi board games. Moreover, this Hungarian game look fantastic, the drawings are amazing, the fictive world is catching, and the best thing is that it can be expanded with new content endlessly, from new maps through factions to special units. And as the Kickstarter campaign hasn’t begun yet, the developers still have a lot of time to fix and balance things.

However, there is not much to fix indeed: maybe the rulebook should be simplified a little bit to make it consumable not only for hardcore gamers, but the less experienced people as well. Thus they could make casual gamers aware that there is another spectacular, simple, but still amazingly complex tactical game that was developed in Hungary.