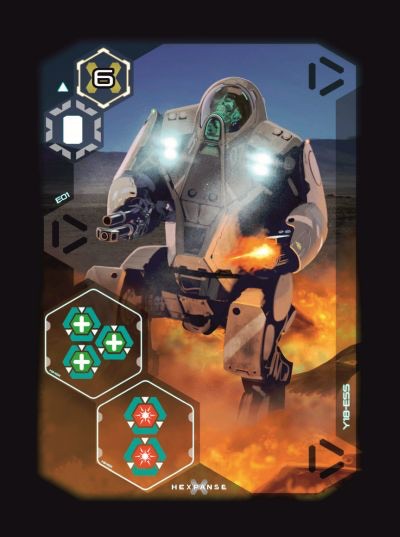 after we have successfully fulfilled our promise, that you will hold your very own games on your hands in short 3 months after the end of the campaign – something that is quite rare among the Kickstarter campaigns – we have new tasks to attend to. During the next week we will be there in Essen, on the largest board game event in the world. Last year we showed you the Invisible, as a work in progress game, and of course we will have something new to show you this year as well…

Those backers, who chose to get their copies in Essen, will find us in Hall 4, at the J106 booth, where we will await them with their well deserved game of Invisible, among other surprises. You do not need to get an appointment for that, just find us during the four days of the event, show your ID and take your copy.

We will also have our previous game, Hexpanse there, so anyone who is interested can try and even buy it. Furthermore, we have made a few unique promo-cards with special features that will only be available here, so if you are into trophy hunting, it would be wise to come soon. On the 26th (Friday) between 14-16 our artist, Gyula Pozsgay dedicates both Hexpanse and Invisible at our booth!

And what would we like to give you in the next year?

In the upcoming year, we would like to take you on a journey to the land of fairy tales again, this time to the universe of the Grimm adventures, Dice upon a time… and as you can see from the title, during the game we will use dice to help us in our adventures to move, and we will have to make towers out of them as well. Quests, magical items and a mechanism are all included in the game, things you have never met before. Unlike Snow White, Little Red Riding-hood, Tom Thumb, Rapunzel and the Musicians of Brehm’s of course, who we will play with during a short one-hour game to gather the most points till the end of the journey, with the use of different supporting possibilities. If you find the concept interesting, feel free to come and try it in Essen, or wait for our further news about it – that will arrive soon, since we plan to launch the Kickstarter in January of 2019, which is only a little more than 2 months away.

Keep one eye to us, as we still reserve some suprise for you!