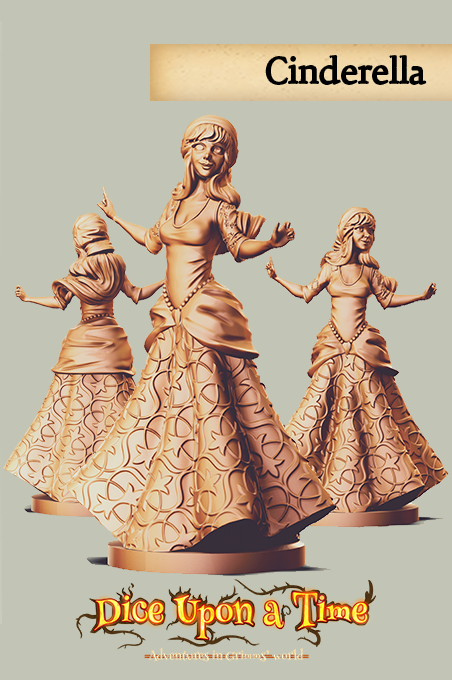 BackerKit in the story

Once upon a time, during our journey, deep in the middle of the dark forest, we met a friendly group. Their name was BackerKit. Our paths led us towards a common goal…

We are happy to announce that BackerKit has opened the gates for you.

The Princess is ready!

Cinderella’s miniature is done! This mini is not going to be manufactured in bulk by the big printing house, but by us like handicraft. The fabrication method allows to apply a unique ornamental pattern on her skirt. But this means a limited number of copies. This is going to be a real exclusive piece, won’t be available in the shops.

The maker of the miniature presents the technology in a nutshell:

Unlike injection molding, the 3D model first needs to be processed and then printed. Processing is essentially the breaking up of the model into manageable parts. After this is done, printing can commence. Firstly, molds are created out of rubber silicone. Then molds are prepared, a liquid polyurethane resin commonly used in model kits and miniature making is poured into them, and they are put under 6 BAR of pressure in a pressure chamber for the entire curing time. This will ensure a professional bubble free surface. One mold can handle about 50-60 casts. Thus a 200-400 pieces production run needs several molds. The resin curing time depends on the brand, ambient temperature, etc. For DUAT I recommend a resin with a curing time of 15-30 minutes. Finally the mold is separated from the casting and is cleaned and prepared for shipping.  Compared to injection molding, resin casting has the advantages to reproduce deeper undercuts, but it has it’s limitations in quantity.

Once talking about the minis, let us share that we have received some pictures of the very first prototype set of the DUAT minis. How do you like them?

Our shipping cost system is based on two pillars: Cinderella & Dice cup, and other packages.

The weight of Cinderella and the Dice cup is lighter than a standard package, so ordering one piece means only 4$ extra shipping cost (two or more are 9$).

The second shipping cost option (9$) applies for the packages. The good news is that it remains 9$ for bigger orders as well. If you missed our previous KS campaigns, this might encourage you to make your Korona Games collection complete.

Hexpanse is a fast, hexagon based tactical board game. In the game players are interstellar commanders battling for dominance on the planets. The players can win the game in two ways: Defeat the opponents’ commanders – or – form the 9 units pattern (a unique formation) which is selected randomly from the Mission card deck at the beginning of the game. To build the formation, players deploy their military units and try to annihilate their opponents’ ones if the tactics requires so. Monetary sources can be spent to hire mercenary units with special abilities or to buy different utilities to gain advantages.

Hexpanse is a unique game on which we haven’t received any negative feedback so far. (Except for one famous reviewer whose video clearly shows that he did not play Hexpanse according to the rules and did not understand the text on the game box.)

Invisible is a simple card game in the style of Dobble, but with gorgeous art as usual from Korona Games, and more interesting methods of playing. To sum up: Draw a card, place it face up in the middle of the table and find which of the belongings of the Wizard or the Witch is missing from the picture, or what is the single object still there. The player who finds and hits the symbol tile of the item first, gets the card and the victory point for it.

Invisible is a light spot-the-difference party game and a lot of fun for all ages.

The dark side of the world trade bubble

Despite all the good news, the world market has brought a less happy twist in the story of our backers in the US and Canada. As you probably already know, the President has implemented a commercial toll against goods from China, effective September 1. As we had no idea about this at the beginning of the campaign, we must react to this unpleasant situation now, and ask for your kind contribution to the toll charges on the games being shipped to the North American continent. Don’t worry, for example with a Deluxe Edition this means only a sum of 2,5 USD that gets charged by the PM system. We are not happy at all having to bother with these kind of extra work and expenses, but… So.

Thank you all for your patience and relentless support!

Korona Games
– Quality in board games –