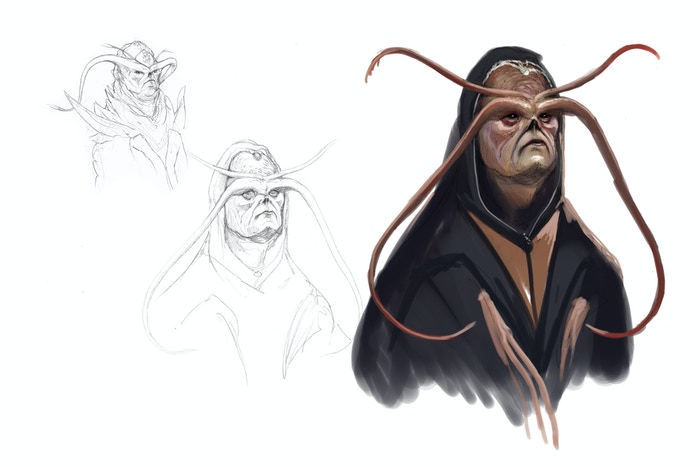 Here comes the moment everybody was waiting for!

The Aliens are approaching…

When we were designing the universe of Hexpanse, we planned a 5th and a 6th faction along with the basic four. They were resting in the background, waiting to come and fight for ruling the galaxy. When our campaign was funded within 24 hours, we already knew that they will join one day, so we began to awaken them. We got many comments, messages, constructive criticism that a 5th and a 6th faction is needed in the game.

So we do not keep stonewalling anymore: we show you the rebelling miners, the Oxes, who were present as a minor faction in our previous videos, and the people of the Mentacle, who boomed into human history from the darkest corners of the galaxy.

After humanity initiated longer voyages into space in the first half of the 21st century, they soon met the ancient and gentle people of Oxes. But human nature tend to dominate and exploit: Oxes found themselves soon in the depths of the hexilium mines, where their unmatched strength, stamina and tranquility resulted in amazingly productive harvest of the precious material. The people, who called themselves xhladtkom in their own language, got the “Ox” cognomen, because humans treated them like farmers treated the oxen. As long and hard decades passed, some brave Oxes tried to break out of the quasi slave yoke, but as humans could deal with these cases in isolation, no significant mass revolts could be organized. At least until recent times, when a new Ox leader decided to end this situation once and for all time. Slowly, they began to modify and arm their miner ships.​​The war of 2242 brought them the opportunity they were waiting for a long time…

Many rumors were spreading that in the universe growing by the rapid expansion of humans, there were some territories where alien races were spotted. But these were not confirmed by anyone except the oxes, despite the photos and other documents, because these were called hoaxes and conspiration theories, and some well-paid scientists could bring up some credibly looking contra arguments. Still, by the 23rd century most of the population was convinced that they exist. More and more rumors spread that the in the depths of the artificial labyrinths of distant moons’ deep craters such enormous underground laboratories were constructed, where they have been experimenting on aliens for a long time. Moreover, some scientists ran hazardous gene manipulation experiments in order to cross aliens and humans: to create a hybrid that has exceeding mental abilities. These rumors were naturally not confirmed officially by the true financial supporters like the Union of Trade Worlds, on the contrary, they fiercely denied them. Then, in 2245 something happened that changed the official standpoint quickly: tricking their creators, many hundreds of Mentacles escaped from the research facilities, conquering some outer planet, thus gaining control of a greater fleet. Their intentions are unknown…

We would like to play a game. Let’s vote what color shall represent the Ox and the Mentacles factions in the game. You can vote on our Facebook page. Write a comment about your vote under the proper post (remember that blue, red, green and yellow are already taken!).

Vote for the color of the Ox faction:

Vote for the color of the Mentacle faction: