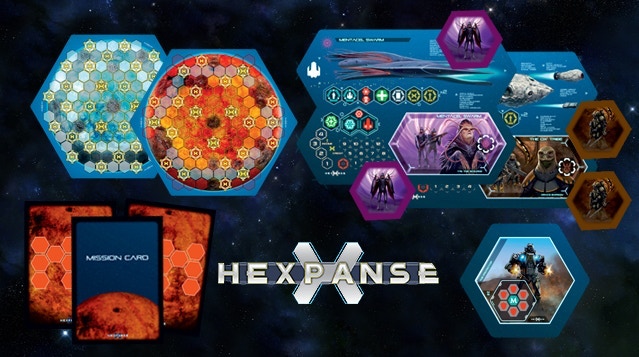 It is a great joy for us to announce that Pledge Manager for Hexpanse is finally on! We have been discussing with multiple PM services for a long time. There were promises that were not fulfilled, and we even almost finished creating our own PM system. These are the reasons why the launch — which was originally planned for June — was delayed. But there is nothing to worry about! The unique keys for Hexpanse’s stargate had been completed: Pledge Manager’s name is a warranty for quality.

Why is pledge manager important?

Make your HEXPANSE complete! Now you have an opportunity to customize your Hexpanse pack with new elements, Kickstarter content and special add-ons to the original game.

IMPORTANT: it is the last chance to get such exclusive contents that will not be included in the market editions. The production has started in the press, so if you do not order Admiral edition and add-ons, you will never have the opportunity again!

What exclusive contents can I get now?

Increase your Captain pledge to Admiral in order to extend your game by a new game board. The devastated surface of Mars covered in craters and the frozen but rich-in-mines Iceworld provide new tactical challenges for you. This double-sided game board also has an increased size, so it is perfect for the 5-6-player games as well.

Admiral’s edition also contains one set elite troop units, which are stronger than normal units, and it is only up to you when you send them into battle.

The other exciting part of the pack is the bunch of constructions, which also mean a new game mode. Your warlord gains a new passive ability as you build a construction. Moreover, we upgraded the minis since the campaign, so it will look even cooler. Take a look at the concepts!

The aliens have arrived! The Alien add-on was made as a community request, as you have chosen the colors of the two new alien factions, the Ox and the Mentacle. The Mentacle warlord, thanks to its developed mental abilities, is capable of manipulating the enemy units, who will suffer damages even before arriving at the battlefield. The race of Ox, who were employed as slaves in the mines and have started a rebellion recently, is massive as a bison. Their regeneration abilities make them super warriors in the battle.

The abilities of the two new races are already exciting, but they most importantly extend the maximum number of players from 4 to 6, so this add-on will provide thrilling combats for even larger companies.

New character sheets, dices, normal and warlord tokens, elite troop tokens, plastic frames and player’s guides belong to the new factions. The other specialties of this add-on are the small mission cards, which bring a third victory condition into the game. We can proudly claim based on the innumerable tests that a very enjoyable alternative game mode was born, and it even gives you the opportunity to play extremely short games if you have only a little time!

The Big Minor Add-on is also available through the Pledge Manager. If you are a true collector and you are fascinated by Hexpanse’s graphics, don’t miss this add-on! Each minor faction has three unique illustrated tokens. You can mark each unit’s allegiance with the color of their plastic frames, while the battlefield becomes the canvas of a sci-fi visual artist.
The Minor Add-on, hence its name, contains two new minor factions: the Yankee and the Prophet’s children, which will be parts of your game if you pick this add-on.

The pack elevates the game experience with the special red mission cards. The hardcore missions are recommended for excellent strategists and experienced players who want to fight epic battles against their rivals!

If you are interested in both add-ons, then order them together! If you order both of them, you can receive them for a lower price, and you will also gain some bonus gifts. If you pick double add-on, we send you six additional elite troop tokens and six plastic frames as a gift, with which you can advance into a new level of tactics.

Do not forget: neither the add-ons nor Admiral’s edition will get onto the shelves of the shops!

Though these contents increase not only the value but also the weight of your pack, we do not demand additional shipping, the difference is on the house. Receive it as a gift from us, with which we intend to share the whole Hexpanse universe with everyone more easily.

Pledge Manager closes on 5th September, and the press will be finished by then, so we will need to determine then what elements will be put in YOUR pack. Do not delay! Do not miss the opportunities that PM offers!

You are a part of Hexpanse’s history now, so it is time to make your family and friends participate as well! Pledge Manager offers the chance to increase the number of copies in your order. It is a splendid opportunity to give a gift to someone, as the simple and easily learnable rules of Hexpanse are comprehensible even for those who have just began their journey in the world of board games. On the other hand, hardcore gamers can also find tactical depth in it, especially thanks to the alternative game modes and the high replay value.

Do not miss the opportunities provided by Pledge Manager, because it is the last chance to get the exclusive content! The key to the stargate is in your hands…